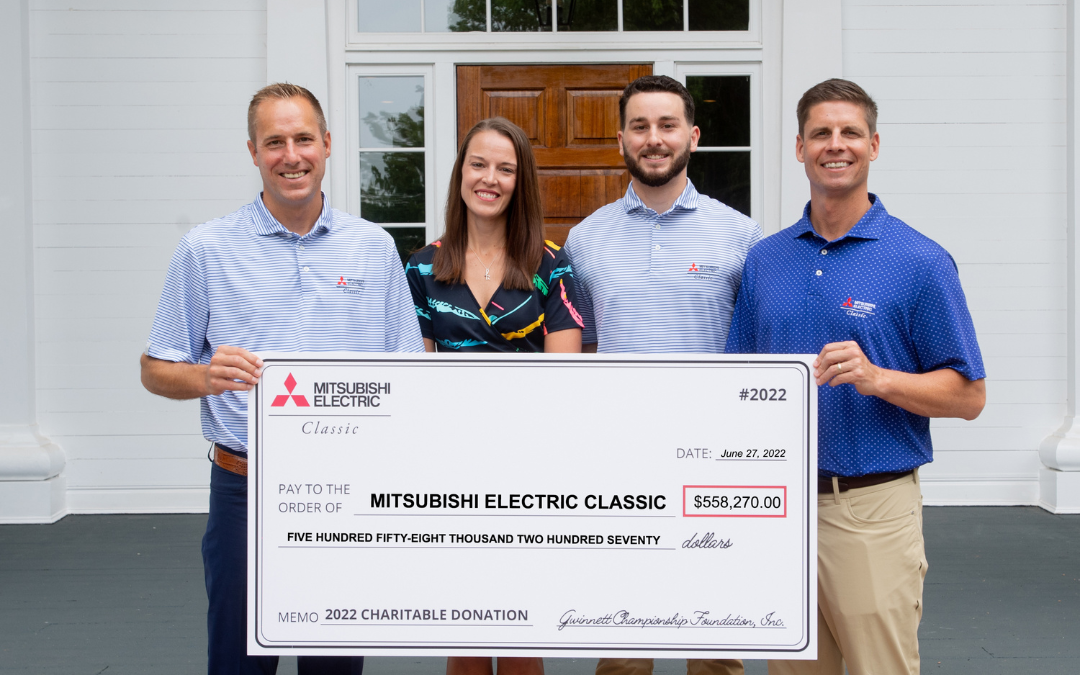 ATLANTA (June 29, 2022) – This year’s Mitsubishi Electric Classic, which was held at TPC Sugarloaf in May, raised and donated $558,270 to Children’s Healthcare of Atlanta, Special Needs Schools of Gwinnett and a number of other local charities in conjunction with the 2022 tournament.

“The Mitsubishi Electric Classic is one of the premier tournaments on the PGA TOUR Champions, not only because of the incredible play year after year, but also because of its commitment to the community through philanthropic giving,” says Mike Corbo, president and CEO of Mitsubishi Electric US Inc. “This year’s tournament was extremely successful in generating funds for good-cause organizations, and we’re proud to continue serving as the title sponsor.”

In addition to the primary charitable organizations, a number of other local groups benefited from the tournament’s Birdies for Charity program, which was sponsored in part by Primerica and Gwinnett Place Ford and Nissan. Together, the tournament and its sponsors raised almost $400,000 for Annandale Village, Boys & Girls Club of Metro Atlanta, Cooper’s Crew, Grayson Cluster Schools Foundation and Women’s Club of Sugarloaf Country Club Charities. Since 2016, Birdies for Charity has raised over $2 million for local organizations.

“Philanthropic giving is an integral part of our event,” says Ashley Hamilton, tournament director of the Mitsubishi Electric Classic. “Not only is the tournament and all the related programming enjoyable for casual and serious golf fans alike, but at the end of the day, we’re positively impacting our local communities in a meaningful way. And we couldn’t do it without the dedication of our staff, fans, professionals, partners, volunteers and everyone else involved.”

The Mitsubishi Electric Classic returns to the metro Atlanta area May 1-7, 2023, and looks forward to welcoming players on PGA TOUR Champions such as Miguel Ángel Jiménez, Ernie Els, Bernhard Langer, John Daly, Vijay Singh, Mike Weir and Jim Furyk. The Mitsubishi Electric Classic proudly stands as a premier golf tournament on the PGA TOUR Champions, but this event is much more than a golf tournament.  The event, which will benefit local charities through the Gwinnett Championship Foundation Inc., has raised over $3.6 million since the first tournament in 2013.  Follow the Mitsubishi Electric Classic online at mitsubishielectricclassic.com, on facebook.com/mitsubishielectricclassic, on Twitter @MEClassicGolf and on Instagram @mitsubishielectricclassic.